WHERE IT ALL BEGAN

The doors opened up for women in wrestling during the 1950s. In this decade, wrestling moved away from the legitimate amateur background and adopted a more modern feel that helped to create the current wrestling business.

Huge names were introduced for the first time. Names such as Bruno Sammartino, Buddy Rogers, Lou Thesz and Harley Race, who are now immortal in the sport of professional wrestling. Despite the large emphasis on male wrestlers, this was also the start of women's professional wrestling. Before the 1950s, wrestling was seen as too violent and dangerous a sport for women to enter. WWII had male wrestlers going to war, which left a gap in sports entertainment venues and federations, so women stepped in the ring center stage for the first time. New pro-styles were created and women were finally given an equal opportunity to perform on a grand stage. Drawing huge crowds, these pioneers paved the way for what women's wrestling is today.

Names like June Byers, Millie Stafford, Ella Waldek, Penny Banner, Mae Young and The Fabulous Moolah (Mary Ellison) all single-handedly helped define the women's division as on the most talented on Earth.

Yet, you simply cannot discuss classic women professional wrestling without discussing Mildred Burke. It was she who really established women's wrestling as a vital part of sports entertainment, and she had it all--the skills, the looks, the body, and the larger-than-life personality that make a star. In the 1950's, she started the World Women's Wrestling Association (WWWA), which was the first governing body specifically for women's wrestling. After she retired in 1956, she trained over 2,000 women who went on to compete world wide, in a variety of styles of matches. All these athletes and sport entertainers deserve great respect.

See footage and photos of some of the other truly legendary glamour girls of wrestling. Check out Fabulous Moolah, Monster Ripper, and Judy Grable--all pioneers in the sport. A membership to gets you exclusive access to our huge Classic Women's Professional Wrestling video collection along with all the glamour girl photo sets, action shots, as well as discounts on vintage wrestling videos, DVDs, and downloads. From title bouts to Tag Teams! All from our Private Collection. So take a journey back in time and experience these great women pioneers in action! Visit: Classic Women's Professional Wrestling Videos.

The glamour girls of wrestling is a phrase that can be used with two different connotations. In a very specific way, it refers to Judy Martin and Leilani Kai, two beautiful American wrestlers who teamed up in the WWF as The Glamour Girls. Managed by Jimmy Hart, these two women made a mark in the 1980s, at one point winning the WWF Woman’s Tag Team Title.

In a broader context, however, glamour girls of wrestling are many of the women from the 50s through the 90s who made their mark in classic professional women’s wrestling. From the gorgeous Ann Casey who earned the name “Panther Girl” with her sexy leopard and animal print suits to Betty Boucher, who could as easily have been a model as a wrestler, these women have their place in pin-ups and in the ring. Mother and daughter teams like Cora and Debbie Combs made their mark as sexy vixens of the ring, as did stunning Lorraine Johnson and her daughter Nickla Roberts from the 60s through the 80s. And of course, the blonde bombshell, Nell Stewart. 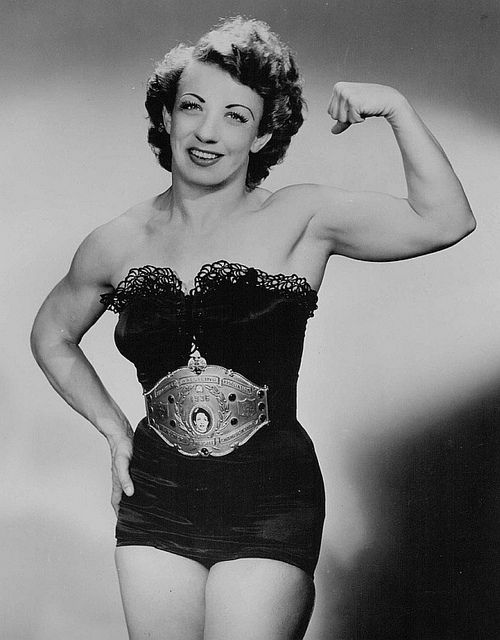 Mildred Burke is considered to have been one of the strongest female competitors to ever participate in professional wrestling. Before starting her wrestling career, she was an office stenographer. Burke began wrestling professionally in the early 1930s. She gained a lot of attention from wrestling and defeating many male wrestlers. Several men tried to pin her and could not. Women who tried to wrestle her were even less successful.

Burke became the Women's World Champion soon after she began her wrestling career. It was a title she kept for nearly two decades. She was the first women's champion in the United States to hold the title for more than 15 years. Women’s World Champion from 1935 to 1954, Burke was sexy, powerful, and savvy. She managed and trained most of the best women in the next generation of wrestling, including Gail Gardner, Susan Sexton, Laura Del Rio, Casey Carr, and Cheryl Day. 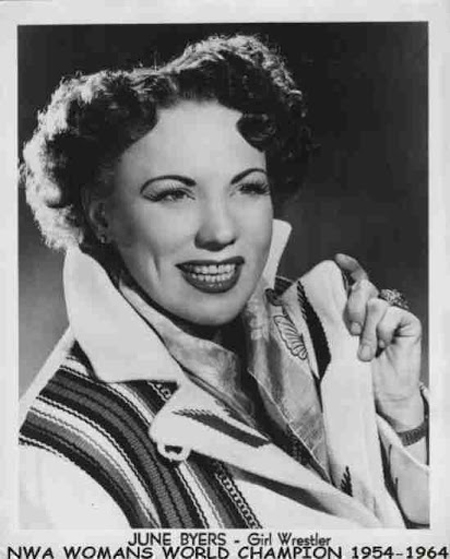 June Byers was one of the first women to be featured on the main stage of women's wrestling. Debuting in 1944, she spent the first few years of her career attempting to score upset wins over established veterans such as Mae Young and Mildred Burke. It wasn't until eight years after her first match, in 1952, that she first gained a title in professional wrestling with her tag team partner, Millie Stafford. Her next taste of gold would come on June 14, 1953, when she won the women's title in a 13-woman gauntlet. It was from this point onwards that she really entered into the realms of mainstream pop culture, guest starring in many popular television shows. The biggest challenge of her career would come again in the form of Mildred Burke, who vacated the title before Byers won it herself.

After a year in the making, it was decided that the ultimate champion would be decided in a two out of three falls match. This match has since been heralded as one of the greatest women's title matches in the history of pro wrestling, and helped to cement the legacy of June Byers as one of the greatest females of her generation. This title would stick with her throughout the rest of her career, even when she didn't hold a respective championship. However, the title would also be the scene of her biggest controversy, as she was stripped of the title by the Baltimore Athletic Commission in 1956 after she publicly announced her desire to retire as champion. This was much frowned upon by many wrestlers as it was seen as a sign of disrespect towards the younger generation. It wasn't long after this that she retired from professional wrestling. 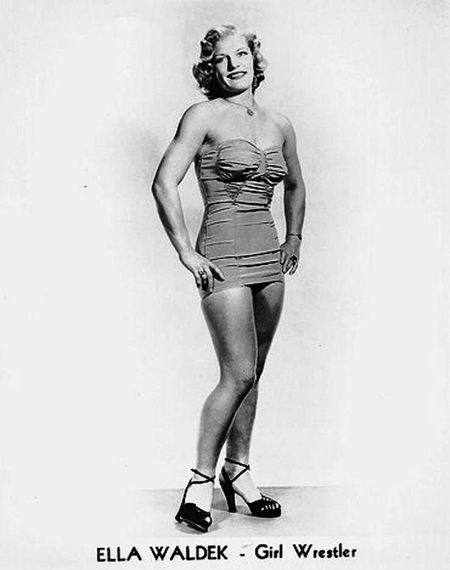 Another great female wrestler to come from the 1950s boom was Ella Waldek. Trained by the Fabulous Moolah, it wasn't long before she held multiple titles including the NWA Florida Women's championship and NWA Tag Team championship.

However, despite her many accomplishments, she became despised by many fans over her part in the accidental death of Janet Boyer Wolfe. During a match with her, Waldek body slammed Wolfe, prompting her to roll to the out of the ring before collapsing. She died shortly afterwards. As no cause of death could originally be established, Waldek, along with the other competitors in the ring at the time, were arrested and held on suspicion of manslaughter. Despite being found innocent, she was soon given the moniker of 'Murderer' by the fans who felt that she had intentionally killed Wolfe. This tag would follow her throughout her career until she retired in 1971 from several nagging injuries that were preventing her from performing safely.

Her prowess and skill made her one of the most difficult opponents for wrestlers to prepare for. It also gained her the respect of many of her peers who regarded her as one of the greatest technical wrestlers of the 1950s. 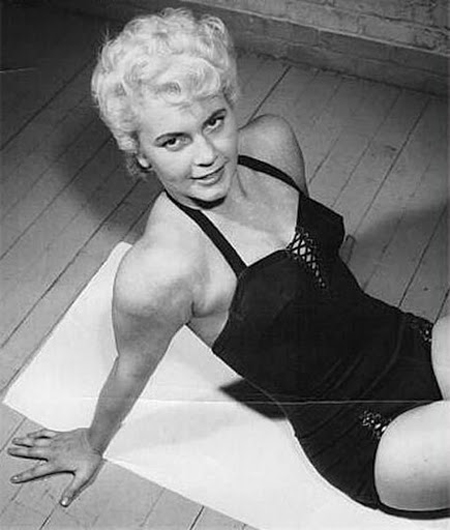 Penny Banner was not only a respected athlete, but also a respected commissioner and ambassador for the sport. Within three years of her debut in 1954, she had held the NWA Women's World Tag Team Championship three times with her respective partners, Bonnie Watson, Bettie Jo Hawkins, and Lorraine Johnson. Banner also earned the honor of becoming the first-ever AWA Women's champion in the summer of 1961. She also earned a second major honor in only losing twice in her last 20 years of active wrestling, being beaten only by The Fabulous Moolah and Belle Stuart.

After her retirement, she took on a backstage role, becoming the commissioner for the PGWA (Professional Girl Wrestling Association), a role she held until her death in 1992. During her long and storied career, Banner excited thousands of fans with her innovative moves, such as the Dropkick, the Sunset Flip and the Inside Cradle. These were moves that, although seen incredibly frequently now, were unheard of in the 1950s. Achieving her place in history, as well as the respect of many of her competitors, Penny Banner is one of the most successful women to come from the 1950's boom.

One of the most recognizable names from any period of wrestling, Mae Young is a wrestler who is still looked at today with awe and respect. Young got her start in the late 1930s, when she defeated the world renowned Gladys Gillem in a shoot fight requested by the promoter, Billy Wolfe. It was after this that she began to extend women's wrestling to outside the United States. In 1941, she and Mildred Burke began to showcase women's wrestling in Canada, before touring Japan in 1954. This was completely unheard of at the time, but Young wanted to capitalize on the lack of male wrestlers who had subsequently gone to fight in World War Two. This helped to introduce an entirely different audience to women's wrestling, opening up more opportunities for future wrestlers to burst onto the scene.

During this period, Young became the NWA Women's champion, as well as the first-ever NWA United States Women's Champion. After about 1968, Mae Young disappeared from the wrestling business until 1999, when she began to do cameo appearances for the WWF. Her first cameo came during the misogynistic gimmick of Jeff Jarrett, who put her in a figure four leg lock after attacking fellow wrestler, The Fabulous Moolah, with a guitar shot. After that, she and Moolah became prominent comedy characters within the WWF, featuring in storylines that included, amongst others, Young giving birth to Mark Henry's 'child'.

Her most recent appearance was at Wrestlemania 25, where she undertook the duties of guest timekeeper for the Miss Wrestlemania tournament. Despite this though, Mae Young will always be remembered most fondly for her early wrestling career, in which she helped to escalate the women's division to the heights it has reached today.

Known worldwide as the most historic women's wrestler in professional wrestling, Mary Ellison, known as The Fabulous Moolah, almost single-handedly helped define the women's division as one of the most talented on Earth. Moolah got her first big break as the valet for 'Nature Boy' Buddy Rogers in the early 1950s. During this time, she became known as one of the first modern managers of wrestling.

In 1955, Moolah began to work for Vince McMahon Sr.'s promotion, Capitol Wrestling Corp. It was at this time that she began to catch the attention of wrestling fans nationwide. Her most famous achievement came on Sept. 18, 1956, when she won the World Women's championship. This was a title that she would retain for over 10 years. Once she lost the championship, she regained possession a few weeks later, before holding onto it for another eight years, finally relinquishing it in 1976 to Sue Green. During this long title reign, she also made history by becoming the first female to wrestle at Madison Square Garden on July 1, 1972. The Fabulous Moolah would continue to work right into the 1980s, becoming a key figure in the growing 'Rock and Wrestling Connection', a movement which would help to shape wrestling today.

Moolah would go into semi-retirement throughout the duration of the 1990s, until she re-signed, along with Mae Young, to become a cameo figure in the new millennium. It was during this time that she not only became the oldest wrestler on the WWF roster, but she also became the oldest woman to hold the WWF Women's title at 76 years old. After this, she would continue to make sporadic appearances until her death on Nov. 2, 2007 at the age of 84. In five decades, The Fabulous Moolah would work to become the greatest female wrestler in professional wrestling history, a title that can not be denied.