In the 50's, Women's Wrestling had a lot of crowd. But especially Mildred Burke, who was very hard working, she thought of herself as an athlete more than an entertainer, and she wanted to make sure that the women she was in the ring with made everything look good too. She insisted on you have to be in shape, you have to know what you're doing; you can't just be an untrained pretty person out in the ring. They insisted that the fans might be interested in the idea of seeing a women;s match, but they'll really be won over if the women can actually outperform the men. So that's what they tried to do. They tried a lot of times to do a lot of moves that were flashier and bigger than the men were doing, more acrobatic moves. Because basically they were trying to impress every time they went out, and the guys were just doing another show on the circuit.

but they'll really be won over if the women can actually outperform the men.  So that's what they tried to do.

In the 50's, it was still a novelty. In the 60's and so forth, there's a bit of a down slide. The wrestler, trainer and promoter Fabulous Moolah took over, she would only book women that she trained and she would charge them a stipend and a booking fee for all of her matches and a lot of times she would have them move onto her compound in South Carolina and charge them rent. So these women, who were working for Moolah in the 60's, & 70's, into the early 80's, might have only been bringing home 40 to 50 percent of what they earned because Moolah was taking everything off the top. But they had no other alternatives;that was the only game in town.

Things changed a little bit in the 1980's. If you remember the Rock 'n' Wrestling Connection with MTV, starting out, the first thing that MTV really focused on was a women’s match. It was Fabulous Moolah, who was by this point in her late 50s, against Wendi Richter. And Wendi Richter was managed by Cyndi Lauper, who'd just had "Girls Just Want to Have Fun"; and was a very big name on MTV. So they aired a women's match and it got huge ratings, and that lead to the first Wrestlemania. So, the very first Wrestlemania was started by the Fabulous Moolah/Wendi Richter. That was a definite high point for women's wrestling. Less than a year later, Wendi Richter was not getting paid the royalties she thought she deserved and left the WWF. GLOW jumped in.

There is no doubt; this era was spectacular for Women's Wrestling!

We have a great collection of Vintage Women's Professional Wrestling matches from the 70's, 80's and 90's. These matches come from all the different federations that rose (and fell) during the Golden Era of wrestling. You'll even see Women's World Champions from all the decades, including some like Sue Sexton, Fabulous Moolah, and Kat Laroux in their Title matches. Visit: Vintage Women's Professional Wrestling.

The list of names of woman wrestlers of the 1980's is stunning! 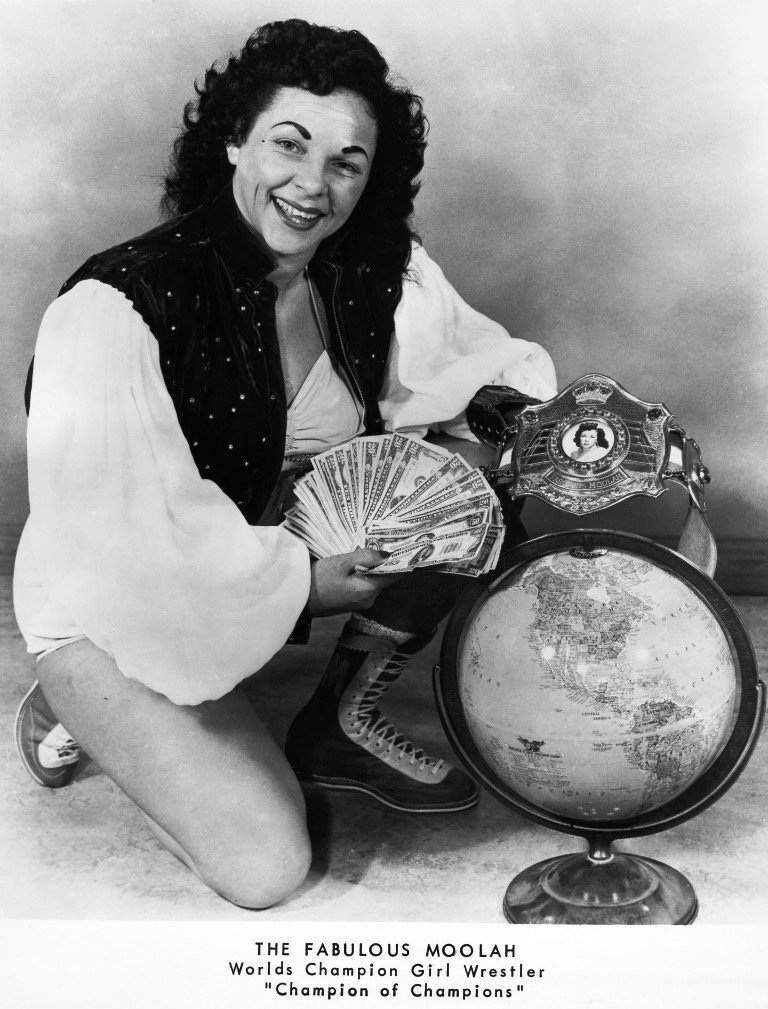 Moolah, who made her wrestling debut in 1949 and wrestled her last match in 2003, was synonymous with women’s wrestling throughout her career. The first of her four official reigns as women’s champion began in 1956 and is billed as having lasted 28 years (she actually lost and regained the title numerous times during that span). Moolah won the championship for the final time in 1999 at 76, easily making her the oldest WWE Women’s Champion ever. The only reason Moolah isn’t at the top of this list is because women’s wrestling largely was regarded as a novelty act during her era, much like midget wrestling was. Moolah was inducted into the WWE Hall of Fame in 1995.

Better known as Madusa — the name she performed under outside of WWE —Blayze was the centerpiece of the women’s division when WWE reactivated its women’s title in 1993. Blayze, who employed an athletic, hard-hitting in-ring style, held the WWE Women’s Championship three times between December 1993 and December 1995. During that time, she had a memorable title program with legendary Japanese star Bull Nakano.  In an infamous moment during the Monday Night War, Blayze’s final title reign in WWE ended when she showed up on “WCW Monday Nitro” and dropped the WWE Championship belt into a trash can. Blayze was inducted into the WWE Hall of Fame in 2015.

Wendi Richter had a strong connection with Cyndi Lauper – indeed, “Girls Just Wanna Have Fun” was her entrance theme, and Cyndi served as her manager for a time. Richter was a key figure in WWE’s Rock ‘n’ Wrestling era in the mid-'80s. When pop star Cyndi Lauper feuded with legendary WWE manager Captain Lou Albano, it culminated with Richter (representing Lauper) defeating Fabulous Moolah (representing Albano) for the WWE Women’s Title —thus ending Moolah’s supposed 28-year title reign —in a match billed as “The Brawl to End It All” that was televised live on MTV in 1984.

Richter became a two-time champion when she regained the title from Leilani Kai at the first Wrestle Mania in 1985. Richter’s second and final reign came to an unceremonious end later that year when she was legitimately double-crossed and pinned by Moolah in a match that has come to be known as “The Original Screwjob.” Richter left WWE shortly thereafter and did not return until 2010 when she was inducted into the WWE Hall of Fame.

While Sherri managed the likes of Ric Flair, Randy Savage, “Million Dollar Man” Ted DiBiase and Shawn Michaels, she was also a superb wrestler. In her 1987 WWE debut, Sherri won the WWE Women’s Title from her mentor, the Fabulous Moolah, and went on to hold the championship for 15 months. In 1989, Sherri was a team captain in the first women’s traditional Survivor Series match.

Moretti was a vet of the 1980s' Gorgeous Ladies of Wrestling (GLOW) circuit, and nearing 40 when she reemerged as the WWF's Ivory in 1999. She remained a force through the mid-2000s.

Keiko Nakano aka Bull Nakano  The fierce Nakano first made her name in her native Japan before tearing through the WWF competition in the mid-1990s.  Defeated Alundra Blayze for the WWF Women's Championship. 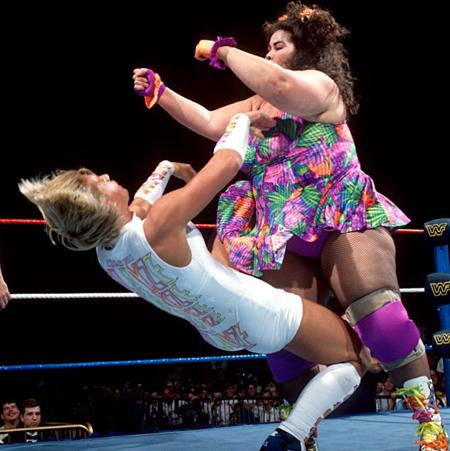 Took Alundra Blayze's WWF title at 1995's Summer Slam. The powerful Canadian-born Sing wrestled in Japan and Puerto Rico as Monster Ripper before joining the WWF as the comic, but still-powerful Bertha Faye. 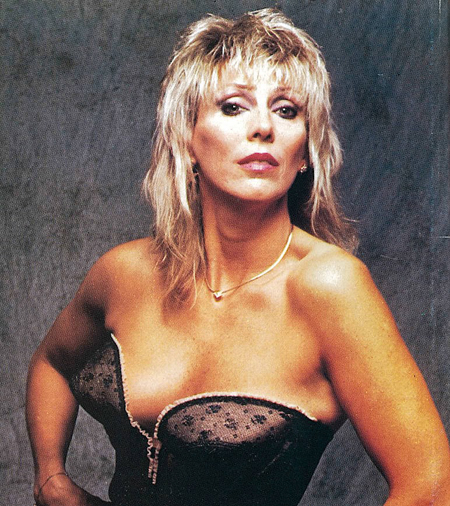 Sexton was born in Perth, Australia. She was trained by Ali Musa the Turk. Sexton went to the United States in 1975 and began working for Mildred Burke. After briefly working for Burke, she began working independent cards around the world. In 1989 she worked for American Wrestling Association. Susan Sexton was the reigning LPWA World champion, and recognized by WCW as World champion. Sue Sexton has relocated to Los Angeles, where she helps train new wrestlers, and also has a writing career.

She was a playable character in the video game, WWF Raw, purportedly the first woman American wrestler to be so immortalized. Vachon knocked around for years before muscling into the WWF and WCW in the 1990s. Once she arrived, she mentored and rivaled Sable, and did battle with Madusa.

Battled Deborah Miceli's Alundra Blayze and, later, Miceli's Madusa. A second-generation pro wrestler, Combs was a 1980s WWF mainstay who made it into the 1990s with grit and ingenuity—she founded the short-lived Women's Pro Wrestling league.

Battled Alundra Blayze for the WWF women's title at Wrestle Mania X. Seymour, another of "Moolahs' Girls," was an old-school pounder and onetime WWF women's champ who endured--she was the only wrestler, man or woman, to appear on the first Wrestle Mania bill and the 10th. She trained 100's or women like RipTide, BobCat, Molly McShane, Brandi Wine and Sweet Destiny to name a few.

Morgan began her career at the age of ten, under the name Daisy Mae, as the valet for her father Les Morgan. She was trained by The Fabulous Moolah, Wolfgang Von Heller and Johnny Rodz. She battled Richter, the NWF Women's Champion, in a first ever women's steel cage match in May 1987. Morgan later held the LPWA Tag Team Championship with Misty Blue Simms and the WWWA Ladies Championship during her career.

She began wrestling on the Californian independent circuit in 1986, primarily for the Independent Wrestling Federation, where she won the promotion's Women's Championship three times. Soon after, she was signed to the Ladies Professional Wrestling Association. Bennett signed with All Japan Women's Pro-Wrestling in 1994 and competed there for several years, and was a fan favorite.

A daughter of Aurelian "Grizzly" Smith, she is a second-generation wrestler.

Was like the spoiled little rich girl Paris Hilton.

A champion of the red-white-and-blue; the ultimate good-girl who battled the forces of anti-American evil.

Her main squeeze was none other than Macho Man Randy Savage

Her arch-rival was the aforementioned Madusa Miceli. Bambi lasted in the wrestling biz longer than most of these ladies; she was still fighting in WOW (Women of Wrestling) in 2001.

Other Women Wrestlers names to mention are:

This Vintage era of Women's Wrestling was a spectacle, filled with great wrestling sports entertainment!

From our Private Collection, watch great videos for fans of vintage women’s professional wrestling. These collections feature many of the greatest women ever to grace the ring, and this rare footage can give you tremendous insight into the history of female combat and sports entertainment. You’ll see huge personalities, fabulous ring savvy, and of course the stunning beauty and glamour that makes real stars of women wrestling!